How to call United Kingdom with 44 country code?

UK is also identified by known ISO 3166-1 Alpha-2 and ISO 3166-1 Alpha-3 codes which are GB and GBR respectively. The first country code is composed of two G and B letters and the second one is composed of three letters: G, B and R. Added to the 44 country code; these three codes are the three main United Kingdom Country Codes. As you can see, three letters code GBR identifies easily United Kingdom than the two letters code GB.

The other known country codes for GB are the internet top-level-domain (.uk and .gb) and the ISO numeric-3 (826). 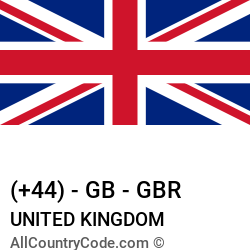 The table below is a complete UK country Code that contains all known codes including 44 phone code which is mandatory to make call from anywhere in the world to united kingdom.

The United Kingdom is made up of Wales, England, Scotland and Northern Ireland and it is an island nation which is northwest of Europe. England for one is home to popular figures such as the Beatles and Williams Shakespeare and has London as its capital, which is both the center of culture and finance. England is also home to old universities such as the Oxford and Cambridge Universities.